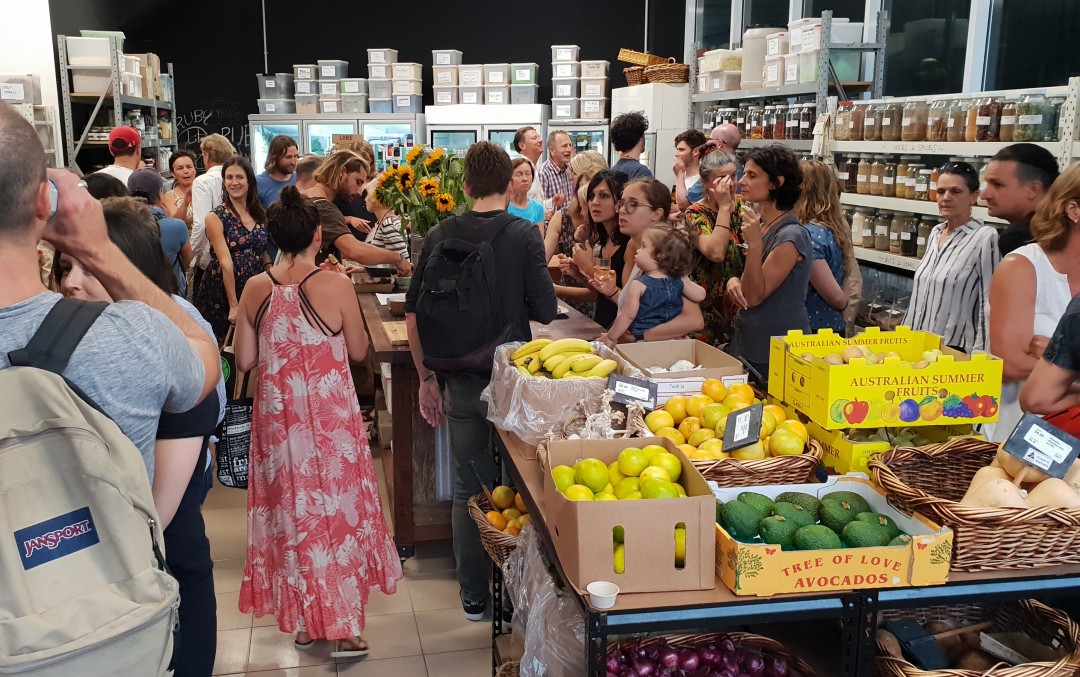 We had a blast! A big thank you to everyone who joined the other week! The Co-Op had never been that packed! It was such a lovely Re-Opening night celebrating what has been a big move to our new location. We want to thank our speakers Karen Smith for the lovely Welcome to Country, MP James Griffin, Sam Byrne from Co-Ops NSW, Clara Williams Roldan and Louise Williams for introducing their book “Quitting Plastic” and Paul from Mrs Toddy’s Tonic for the yummy health tonic samples and DeVita for the delicious pizza. A big thank you as well to our numerous volunteers who helped make the evening a success.

Karen Smith started the evening with a Welcome to Country talking about Governor Phillip’s landing and the fact that Manly Cove was named Eve Cove at some point as it was the site of the first meeting with Aboriginal women.
Our local MP James Griffin was excited and “incredibly proud in this amazingly fitted out shop surrounded by wonderful friends, supporters, members and the community”. He specifically called out Keelah Lam, the Co-Op’s co-founder all those years ago and still a driving force behind the scenes.

Our chairperson Sarah Weate nailed it with her quote from Shakespeare’s Scottish play: “One can define a witch because they can look into the seeds of time and can see which will grow and which will not. I am not a witch, but if I were a witch, I’d have the secret power to be able to look into the seeds of time and look into what grains will become moth infested.” 🙂 She thanked our volunteers and everyone involved not just in the move, but the Co-Op’s success and survival, driving forward plastic-free and healthy living for over 20 years.

We also welcomed Sam Bryne from Co-Ops NSW who talked about the principles of the global movement of co-operatives: care for the community and cooperating / working together. There are now 15 food co-ops in NSW and over 600 co-ops formally registered.
We were also proud to host Clara Williams Roldan and Louise Williams who presented their newly released book “Quitting Plastic” which is available in-store. Clara and Louise have been cutting down plastic in their live for many, many years and often heard the question from friends “what do I do about this”. Their book focuses on practical solutions, the history of plastic, old habits die hard, how to make a change and the future. “The idea is to put this book in your purse and use in your day to day.”

After the official speeches we celebrated over a glass (or two) of delicious wine from Tamburlaine Organics, yummy tastings of Mrs Toddy’s Tonic (an Indonesian style health tonic brewed on the Northern Beaches) pizza from DeVita Manly and enjoyed animated conversations. What a great night! Thank you everyone for coming. 🙂