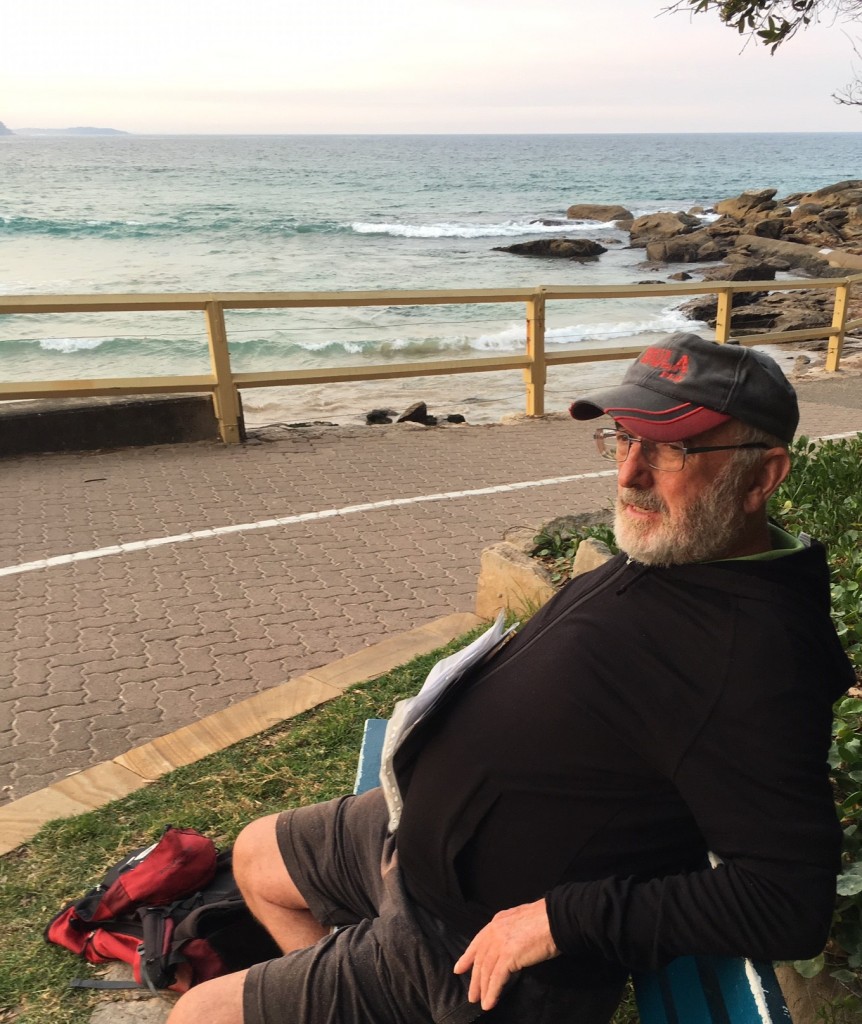 Meet one of our Super Volunteers, Michael Wynne.

It’s a smoke filled late afternoon in Manly due to burning off in Western Sydney. Michael appears on his bike. He secures it about half-way along the beach and suggests we walk along to what he fondly calls his ‘office’, a perfectly situated bench just around from the Manly Surf Life Saving Club. Michael says the energy from the sea is strong here and proceeds to share his story with me.

Michael has been volunteering at the Manly Food Co-Op for a few months now and you can usually find him in store on Thursday afternoons, serving customers with a smile, or helping to rearrange product displays, new shelving, re-stocking etc. He’s happy to help in any way he can really.

Michael has an interesting past with a variety of life experiences. He once hitch hiked from Vancouver to Toronto with just his dog Sammy. He studied Chinese medicine and attended yoga teacher training in Canada and is now practising yoga therapy. He’s also a qualified shiatsu therapist, zen and meditation facilitator.

He has also taught English as a second language in many schools around Australia and has worked at detention centres in Darwin, which he expresses was the most difficult of his callings. We talk about our shared concerns for the environment and global warming and he says he lives on a road high up in North Manly because he doesn’t think the sea will rise that far anytime soon!

Michael has spent several years of his life volunteering his time for others and he says the universe has rewarded him with unexpected kindness or ‘luck’ in many ways along the journey. A particular time he remembers is when a lady friend from the past gave him a car for free at a time when he really needed one, but couldn’t afford it. The agreement was to buy it months later.

He likes to cook and some of his favourite products from the Manly Food Co-Op include Miso, Umeboshi (a sour plum common in Japan, closely related to the apricot) – it’s said to rid the body of toxins, improve energy and aid in digestion. Natto is another favourite of his (a Japanese food made from fermented soybeans). The Japanese often eat this for breakfast and according to sbs.com.au, It has the ability to get into the blood stream and directly destroy blood clots, thin the blood and improve blood flow. Umeboshi and Natto aren’t very well known, but Michael has a couple of recipes he’s going to share with us.

Your Co-Op can’t survive without our volunteers, they are the lifeblood of our community. As a thank you for your volunteered time, we are giving you 2 energy points for every 2 hours volunteered which gives you an extra discount of 10% on your shopping (20% in total). This is our way of saying thank you to all our volunteers.

If you are interested in volunteering, please check out our Volunteer Page and/or email volunteercoordinator@manlyfoodcoop.org. We are looking forward to hearing from you! 🙂