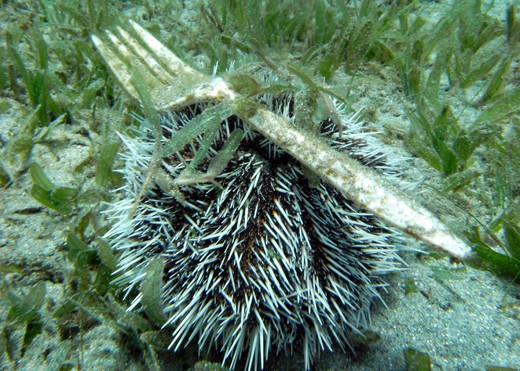 On Saturday I went to the SO Manly and Northern Beaches Council’s clean-up of Manly Cove beach and screening of the documentary A Plastic Ocean. During the well-organised beach clean-up I felt a pair of young, curious eyes watching me. When I told the little girl I was cleaning up plastic, she jumped straight in and conscripted her even younger brother and sister to help! She told me she gave a speech at her school about plastic straws, and asked if I’d seen the video on Youtube of the turtle with a straw stuck in its nose? (I can’t un-see it.)

I arrived late so it seemed all of the plastic had been collected, but a simple sift through the sand usually revealed at least one tiny piece of a bottle cap or styrofoam. Imagine what it would take to get them all! On this ONE beach! This was the first depressing note of the night…

Still, it felt great to work with fellow environmentalists and to make a dedicated effort to pick up some plastic, even though I always take three (at least 3) when I go for a swim or surf.

We had a quick tour of the Sea Life Sanctuary, which is closing in December. The highlight for me was the penguin talk – did you know the couple living under the wharf were both separately rescued from pollution? She had a coffee cup stuck on her head, and he was trapped in fishing line and nearly drowning. Now they have four chicks! If that’s not proof that love conquers plastic …

On to the speeches and the film:

James Chan, Sustainability Officer of Northern Beaches Council also gave an introduction, and it seems the new council is really supportive of waste reduction. I’d love to hear from any Co-Op members who have contacts in Council. I’m sure there will be lots of opportunities for us to partner with them.

Harriet Spark from SO Manly gave a heartfelt introduction and local context to the film, and I was especially stoked to hear her give a huge recommendation of the Co-Op to the like-minded crowd. She also recounted her involvement in the cleanup of Chilli Beach in far north Queensland, in August this year, in which the Co-Op’s own Portia Hackett participated!

But as Harriet mentioned in her remarks, “if all we do is clean up, clean up is all we’ll ever do.” We have to advocate for alternatives. And the Manly Food Co-Op is one very local alternative!

Then they introduced Bethany, a young student who had done a presentation at her school on plastic pollution – the very same young girl who had helped me out! She was so impressive and switched on; I’m sure she inspired the crowd to get even more involved than they may currently be. It was a beautiful night, but of course the film was very confronting, overwhelming and saddening – but don’t let that stop you from checking it out!

The film includes the expected shocking footage and statistics about the size and shape of the problem of plastic pollution – the albatrosses on Midway with guts full of plastic, garbage islands on Tuvalu, and unfathomable statistics of oil production and plastic bag consumption.  The new information to me was that 80% of plastic in the ocean is suspected to have come from land based sources. This shows why it’s so important to avoid plastic packaging in the first place, even if we dispose of it in what we expect is a responsible manner.

My key takeaways from the whole evening are:

I hope you can help us spread the word to family, friends, neighbours and the wider community that the Manly Food Co-Op offers a currently available and viable alternative to plastic packaging waste, which just may end up in the ocean, even if it is placed in the appropriate land-based bin.